What is it about vacation that makes us as human beings so happy? Is it the all day relaxation? Is it the lack of worries or stress? Is it all the unhealthy eating that we don’t feel guilty about? Well, whatever the reason may be, vacation is certainly one of the most wonderful things in life. Perhaps that’s why you feel so freaking depressed when its all over.

The aforementioned luxuries are no more and it is back to the world of routines, schedules, and normalcy. Now we are obliged to actually get up and accomplish something with our days. We must go back to work, because two weeks off  was already pushing it. We now feel pressure to eat healthy and workout; things that are magically forgotten while on vacation.

That is what I am suffering from right now. I just feel like a big blob with motivation to do absolutely nothing. Its nice to be home after two weeks away, but I’m not completely happy about it. While I am not looking forward to returning to my daily routine, I am mostly just sad that vacation is over. I had such an amazing time with my family and Tucker, I am just really sad for it to be done. It went by way too fast, and the summer is going by even faster, which scares me.

But I still have over a month until my summer is over, so I won’t get too upset. But until I’m over my post vacation blues, I’ll just feel sorry for myself and constantly look over these pictures, the best from the vacation! 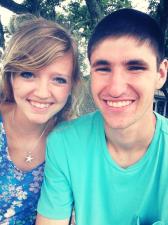 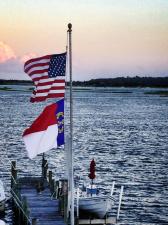 Dolly learning to swim with Tucker

Gibby learning to swim with Will

Loving the beach in Nags Head

Walking my dog, Gibby, on the beach 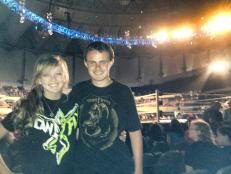 Dinner at the Black Pelican

Not much to say today, but I hope you all are enjoying your summers! Until next time…

On Saturday, Tucker & I left Cape Carteret and headed up the coast to Nags Head, North Carolina. As I have mentioned before, my parents own a beach house here, so we will be spending this week with my family. We always come to Nags Head this time of year to celebrate 4th of July. However this year I was with Tucker’s family on 4th of July, which was weird. Don’t get me wrong, I mean I had a lot of fun and Tucker’s family was great, but it was my first time being away from my family on the 4th.

Its hard for me to be away from my family, we have always been extremely close. But being in new surroundings with new people is certainly not a bad thing, hard as it sometimes may be. In Cape Carteret I was exposed to lots of new things that I probably never would have experienced on my own. For instance, prior to last year’s Cape Carteret trip, the only boat I had ever been on was a cruise ship. But now, I have been all kinds of skiffs and dinghies and whatever else… I may not understand any of it but HEY- at least I’ve had some boating experience now, and I learn more every year. Boating is a really cool thing that I’m happy Tucker introduced me to! Oh, and water sports! Tucker loves all kinds of water sports. He sails, water-skis, and surfs… I can only really tube but hey, at least I’m learning, right? By next year I’ll be fully standing on skis for miles… Or maybe I should aim for first just trying the water skis 😉

Also, last week Tucker’s family and I took a trip to Cape Lookout, where I witnessed one of the coolest things I have ever seen! Wild horses! I had never seen horses in their natural habitat before, and it was breathtaking. Plus, I had no idea that horses could swim, is that like a known thing?

Well I certainly had no clue, but now I have witnessed it with my own two eyes. The horses crossed the water right in front of our ferry! It was beautiful. Now I know it seems rather insignificant of thing, but it was an amazing sight to see, and a memory I will cherish forever. Its all something I never would have experienced had I been in Nags Head. It was sad not be with my family on July 4th, but I guess part of growing up is getting out there on your own and making your own adventures. And I certainly had a few adventures in Cape Carteret!

I’ve found that one of the hardest parts of growing up is balancing those new adventures with family traditions. Tucker and I have a good system for the July 4th celebration: one week with his family in Cape Carteret and one with mine in Nags Head. Now its time for the Wood Nags Head week, where I’ll be a little more in my element. We don’t really delve into much boating or water sports here, just a lot beaching. So I’ll have a lot of time to catch up on my reading and tanning 🙂

It’s so nice to be with my family again, but I had a lot of fun last week too, and I’m glad to have gained those new experiences. Not to be cheesy but I think learning to balance those old and new experiences really is an important part of growing up. And hey who knows? Maybe I can incorporate some of my new experiences into my time here in Nags Head. I’ve had the strong desire to try paddle boarding, I’m sure the water sports expert could help me out!

I’m looking forward to a nice week, and I’ll be sure to write about any new adventures 🙂

When I was nine years old, my parents bought our beach house in Nags Head, North Carolina. Since then, we have spent a good amount of our summers there. The highlight was always the Fourth of July. We always have a big group of friends and family down there, which makes for a lot of fun. The only negative thing about the holiday is the mass of people that take over the beach. In a short amount of time, the beach goes from being moderately mellow to complete hooplah. The beaching experience of Fourth of July is not particularly relaxing, or even enjoyable at times, its actually pretty annoying.

There is a term some of local friends taught us: tourons (tourist + moron = tourons). Tourons are people who really just seem to know how to handle themselves on the beach. You know, those people whom don’t seem realize that there are hundreds of others on the same beach. Well on Fourth of July, the tourons take the beach in grand fashion.

Tourons are an annoyance to everyone around them. You may be laughing now, but you probably have more touron tendencies than you realize (thats okay- we all do). My mom and I used to joke about writing a book called “Beach Etiquette,” that would teach people all of the dos and do nots of beaching. But now that I have a blog, why write a book? I can post my tips here! I debated weather or not to actually write this post, because I did not want to come off as snobby. But then I remembered that my email address did used to be “BeachDiva94,” so I figured, why not? It’s time for the Beach Diva to go to work.

Here are some tips for all of you beach-goers to ensure an enjoyable day for yourself, and those around you…

There are many more things I could mention, but these are the basics. Don’t feel bad if you realize that you commit many of these things annually, most of us do. Even the Beach Diva herself is guilty of frequent towel flapping. But if we take these tips to heart and be mindful of our surroundings, I believe we can have a peaceful Fourth of July beach day! It can be done. If you take one thing from this post, I hope it is such:

DO NOT BE A TOURON.

Here’s to a happy, safe, a touron-free July 4th, everyone! Remember your beach etiquette 😉

"I figure life's a gift and I don't intend on wasting it. You don't know what hand you're gonna get dealt next. You learn to take life as it comes at you... To make each day count." ~Jack Dawson